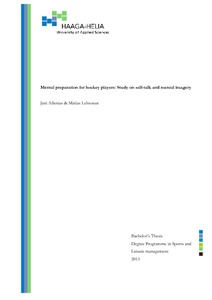 This bachelor thesis is a study of mental preparation, and how to go it through with players. Objective is to find easy way to start teaching mental preparation for players and two main themes were mental imagery and self-talk.
This report includes theory part of different consepts of mental preparation and extensive theory parts of mental imagery and self-talk. The practical section is made of the lessons that players were taught during the season and assignment that they were given. The analysis part includes surveys that players did before and after these teaching periods.
Testing groups that were used in this project were Pelicans U16 and Vierumäki United U20 teams. Pelicans U16 started working with self-talk and Vierumäki United with mental imagery. Both teams used one month in to one topic and then changed it. Total teaching period was two months. Thesis was started on summer 2014 and teaching part was made in start of year 2015.
Results were that we found an easy way to start developing mental skills for junior hockey players and players taught that mental imagier was easier to use before performance and in learning new skills. Self-talk was founded easier and better to use during performance and it gave new energy to players between the shifts.