Development of a demonstration device for vibrations 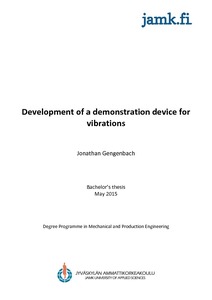 Unbalanced rotors vibrate while turning. This effec
t can be described on a simplified
model, the Laval-Rotor. The Laval-Rotor consists of
a pin-supported massless shaft and a
centric attached disk. The Laval-Rotor can be trans
ferred into a plane damped mass-spring
system with a certain undamped natural frequency. D
ue to the imbalance of the rotor, its
centre of mass is not on the shaft axis. The distan
ce between both is called eccentricity.
Through turning, the imbalance excites the rotor to
oscillate. Depending on the damping of
the system, the deflexion of the rotor varies diffe
rently. The Laval-Rotor’s transfer function
shows a maximum deflexion at a revolution speed sim
ilar to the systems natural
frequency. Since high shaft deflexions bring the ri
sk of a prematurely collapse and further
hazards, this revolution speed is called the shaft’
s critical speed. The Laval-Rotor has due
to the assumed simplifications just a single degree
of freedom. In general, each degree of
freedom has an own natural frequency and so an own
critical speed. Therefore, an actual
rotor can have several critical speeds which have t
o be considered. Besides the bending
oscillating a rotor also oscillates rotational. Thi
s rotational behaviour also has to be taken
in account while designing a rotor.
Part of the thesis-work is the development of a dem
onstration device that shows the
effect of imbalanced excited bending vibrations. Th
e critical speeds of the rotor can be
affected by adjusting the position of the bearings
as well as the position and amount of the
attached disks. The development is completely made
from the idea until the, for the
manufacturing needed drawings and documents in the
development process steps:
planning, concept, drafting and elaboration.