WQ-truss design according to Russian and European standards 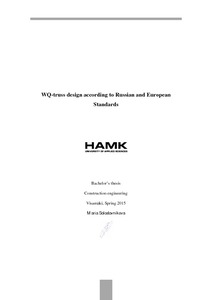 The purpose of this Bachelor’s thesis was to compare the Russian and Eu-
ropean norms for the design of a new solution, called WQ-truss system.
The aim was to provide detailed information about the Russian and Euro-
pean Standards and design methods to make things clear for foreign de-
signers. The study was conducted using the latest versions of the Russian
Standards and Eurocodes.
In addition, the main idea was to show the advantages of the WQ-truss and
the calculation methods of the system based on the Russian and European
Standards. This article did not cover joint design which can be developed
and researched in the future.
The comparison was based on the results of the calculations which were
performed using Autodesk Robot Professional. The capacity usage ratios
were compared. It was concluded that design according to Eurocodes al-
lows using plastic capacity of steel, uses different safety factors and meth-
ods in general. This fact is influenced results in general.
Literature concerning the Russian and European norms helped to imple-
ment the research. Also, information about WQ-truss from websites of
manufacturers was used.