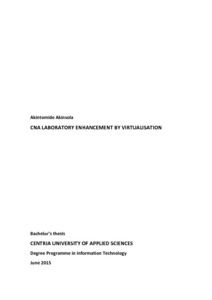 The role of the Cisco Networking Academy of Centria University of Applied Sciences in the Media and Communication Technology specialisation is an essential one. An improvement in the infrastructure of the CNA laboratory directly leads to an improvement in the quality of education received in the laboratory. This thesis work described the creation of an alternative arrangement using Linux Ubuntu as a supplementary option in the studying of networking subjects in the CNA laboratory of the university.

Linux Ubuntu is a free software available to download and with some adjustments and modifications it can be made to function just as properly as a Windows operating system in the experience of learning networking. The process of creating and deploying a customised Ubuntu image deployed via the Virtual Machine, was discussed in this thesis work. Linux is a UNIX-like software, the knowledge of which is valuable to students as they study to become professionals. An introduction to several applications such as Minicom, Wireshark, and Nmap was also discussed in this thesis. A simple laboratory experiment was designed to test the performance and functioning of the newly created system. Expertise in more than one operating system expands the horizon of future students of the UAS, an opportunity older students did not have, and capacitates them to become proficient engineers.