The formation of tour packages to Russia for Finns 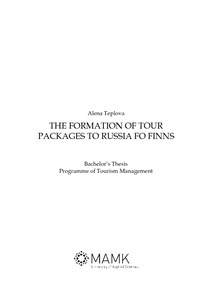 Tourism in Finland is sufficiently well developed. Finland has a good location which opens an easy access for European countries and Russia as well. Finnish tourists mostly travel to Estonia, Sweden and other countries in Europe. However, even though Russia has good prospects for tourism development, it does not attract Finnish customers as well as it could. Thus, the creation of attractive tourist packages to Russia for Finnish tourists became appealing.

The analyses of Russian and Finnish tourist markets were done in the thesis, as well as a short overview of some Finnish travel agencies. Based on existing travel packages of MatkaVekka company and interview with thesis commissioner components of two tourist packages were found. The most attractive components of the tours for Finns were chosen based on questionnaire.

As a result one tour was fully completed. Also, recommendations were given about the second tour because as for now there is not enough information about schedules.