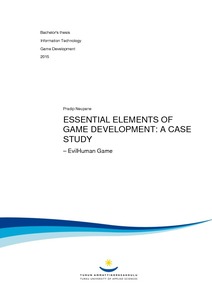 The game industries have been growing rapidly since the last decade. The main objective of this thesis was to develop a game from scratch to have a deeper look at the game development process. This thesis attempts to answer the following questions; what are the essential elements for game design, how to generate revenue through games by using different monetization models, what are the tools and software available today to create a game, what is game testing methodology and how it is implemented, and, finally, how to manage customer service. To know about whole game design process, one simple mobile game called“EvilHuman” was designed.
A fully functional game was completed using the Unity3D game engine and was published in Google Play Store to receive comments and feedbacks from the users. The game was downloaded between 100 – 500 times. The users who downloaded the game wrote reviews in Google Play Store, and the average rating was 4.6 out of 5. There were many challenges duringthe practical part of this thesis. The main challenge for this game was learning Unity3D, C# programming, game designing and modeling. However, some assets were used from the premade assets from the Unity3D asset store, which had made the design process easier.
The publishing of this game in Google Play has motivated the author to continue in the game development field because of suggestions and positive feedback, which were provided by the real users who downloaded the game and played it.