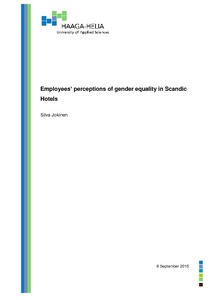 Finland is a country with good situation in the gender equality issues. However, the situation is not perfect, and there are possibilities to get better. The division of industries into predominantly female and predominantly male industries remains an issue affecting the gender equality in Finland. Also, there is discussion about different kinds of glass obstacles, which affect women’s ability to advance into managerial positions as easily as men.

The goal of the thesis is to get an understanding of the perceptions about gender equality of women and men working in the hospitality industry, the division of work between genders, advancement and career opportunities as well as fair treatment. The idea for the thesis came from the commissioning company, Scandic Hotels Oy. This thesis will be a further research of their equality plan.

This research was done with a quantitative research method, as it was seen as a faster, and easier way to conduct the research. A questionnaire, designed by the writer of the thesis, was sent to 700 employees of all departments working for Scandic Hotels Oy. The questionnaire was open from 28th of April 2015 until the 10th of May 2015. The total amount of respondents was 155, which is about 22 percent of the employees.

The results mainly showed the gender equality issues of Scandic Hotels Oy are well taken care of. Most employees perceived that Finland is a country with a good level of gender equality. The hospitality industry was seen as a predominantly female industry. And it was perceived that an employee is respected regardless his/her gender. However, the results gave an image that there might still be obstacles for women in advancement, as well as one’s family situation might affect the advancement. Not only is there a little room for improvement at Scandic, but also in the whole country.