Developing a financial simulation tool as a web application 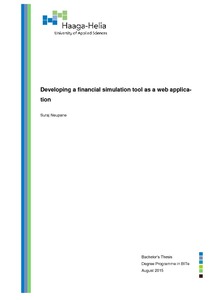 “Kunnan Taitoa Oy”, a Finnish municipal financial expert, commissioned to upgrade its financial simulation tool from its current spreadsheet status to a web application. The principles of Open source served as the foundation of software development for a team of Haaga-Helia students who participated in the project ‘Taitoa’. The project aimed to deliver the working version of the web application. This thesis documents the process of application development and the thesis itself is a project-based thesis.The paper highlights the benefit of using Agile development methodologies, Scrum over the traditional Waterfall model. Taitoa developed a routine to deliver its final product by the working increment of the software in three sprints.However, choosing backend or frontend technology from many possibilities as the need of application was the challenging set of tasks addressed at the beginning.

While navigating through the technology dilemma, this study focuses on the advantages of using SPA (Single Page Application) technology for Taitoa. Deploying AngularJS as the frontend framework and PHP as the backend API language. Taitoa is powered by MariaDB relational databases.

On the other hand, a monotonous UI (User Interface) of the spreadsheet needed to be transformed into more ‘Game-like simulation’ of a web application which was made possible with libraries like JQuery, Collapse.js, Bootstrap and C3 charts.

Besides agile model used, a short requirement document was produced as a result of study the to give an overview of how the end user requirement was transformed to software as a solution and the software documentation is included in the paper to understand the core technology and its role in application.