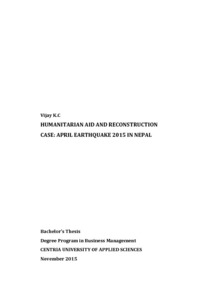 The purpose of this thesis was to have an insight on major earthquake occurred in Nepal in April of 2015, its instant impact to Nepalese citizens on social and economic bases, supports from around the globe and the possible ways of recovery.

The earthquake happened in Nepal in April 2015 which led to many Nepalese losing lives, being injured and were homeless. Numerous sympathies from international communities were received, many of them provided and assured in rescue and relief supports. The primary purpose of this thesis report was set to give the basic knowledge of earthquakes, the impact of April earthquake in Nepal, and the basic overview of national and international support. In addition, due to the many reasons behind, national and international earthquakes relief supports have not been used righteously and economically to the fields where mostly needed. This thesis targeted to find those hidden grounds of such hindrance and tried to give suggestions for a possible way out.

After finding a temporary solution, this thesis endeavored to acknowledge the need of a permanent solution to avoid possible devastation because of earthquakes in upcoming future, as Nepal is always an earthquake prone area. This approach required a very distinctive methodology and very wide and relative range of research because of the suitability on geo-economic and socio-political challenges in Nepal. Even though the resources for this thesis writing were very limited and even needed to be filtered many times in many cases for the particular purpose, it offered some useful and viable options for a safe and economic livelihood.