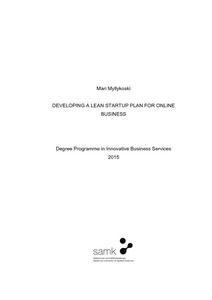 The purpose of this thesis was to develop a lean startup plan for an online company Kiddsafe Ltd. The company is a UK based startup company selling children’s locator devices, which resemble wristbands. The lean startup plan aimed to validate the bu-siness idea of the company by using practical methods of testing as defined in the lean startup methodology. The design and tactics of the research methods used were those defined by the lean startup methodology itself. The aim was to build a lean startup plan in three months, to validate the company’s business idea with customer experiments, to show a business model coherently on one page, and to include new insights on product features and next steps for the company to carry out. The metho-dology of the thesis was that of the lean startup: pragmatism. Pragmatic philosophi-cal stance was taken so that the research could focus on the relevant research ques-tions and finding methods of testing which would have the most value adding fin-dings for the startup. A mixed-method research consisting of qualitative and quanti-tative data collection techniques were used. A self-selecting sampling was chosen to study those willing to participate in the research in depth. Complementary research techniques were used in order to cover all aspects of the research investigation. The research strategy applied was a case study where Kiddsafe Ltd. was used as a single case. Questionnaires and structured interviews were a part of the survey strategy. A landing page was created as a minimum viable product to ensure the company was on the right direction. The Validation Board and Lean Canvas were used as tools to validate the business idea of Kiddsafe Ltd. By following the lean startup process, the assumptions that the business idea is based on were assessed. This was conducted as a step-by-step method of determining whether the business will have sustainable suc-cess in the future. After the data analysis, it could be confirmed that the thesis objec-tives were met. Lean startup methodology helped Kiddsafe avoid waste, it helped to build a lean startup plan in three months, and it showed the plan on one page. The business idea was validated, and it was determined that the company will have great potential future success. Specific customer preferences were discovered such as fea-tures preventing kidnappings and locators with GPS-function. Next steps were pro-posed including setting up Google AdWords campaign, a Shopify account, and a blog.