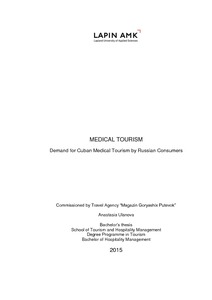 The chosen research method was quantitative research through questionnaires sent to companies involved in medical tourism both in Cuba and Russia, as well as content analysis and case studies.

This report could be used to furthermore develop medical tourism, not only between Cuba and Russia, but in general. The results may be used for the development of cooperation between Cuban and Russian organizations, as it contains information on the possible structure of the institutions and the way cooperation could be organized by both countries.