Routing in a Virtualised Environment with RouterOS 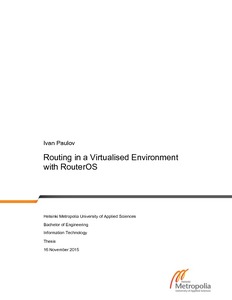 The purpose of this thesis was to test network implementation in a virtualised environment using virtual machines running Mikrotik RouterOS on top of VMware Fusion hypervisor. The aim was to create and test virtualised networks using the technologies mentioned above in a manner similar to a networking laboratory exercise.

This study starts by describing the basic concepts in computer networking, equipment, protocols and methods. After the concepts have been explained, detailed instructions are given on how to set up a virtualised networking laboratory.

Two laboratory exercises were planned and implemented. As a result, a host of networking technologies were successfully tested to work: dynamic routing, tunnelling, load balancing, static routing, network address port translation and backup routes. Examples of configurations were given for both a graphical user interface and a command line interface interaction. Limitations and problems of the studied technologies for use as a virtualised networking laboratory were identified and elaborated upon.

As a conclusion, the aim of the study was met. RouterOS and VMware Fusion are user friendly and work together without issues. The instructions in this thesis can be used as a guide to create one’s own network implementations. Interesting areas for further research include implementation of switching and/or software defined networking using OpenFlow with RouterOS.