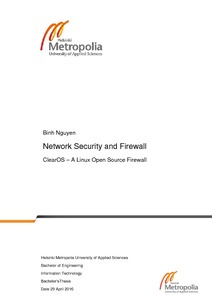 The purpose of this final year project was to learn how to use a firewall - the outermost layer of protection - for network security. The aim was to learn the basic concepts of a firewall and threats against security system and to find methods to defend against the detected problems.

The first part of the study describes the overall concepts, functions and types of a firewall. Also some network security threats and attacks are mentioned. Details of a firewall basic architectures are presented and explained, how the architectures work, what the biggest advantages are and why use them. The second part of the study focuses on studying and testing ClearOS - a Linux open source a firewall- which can be effectively deployed for small and medium organizations. The method used in this project is combining theories with practical testing on an open source firewall product.

The result in the testing phase shows that the overall security of the system was raised to the satisfied level. Some suggestions for improvement for this project such as VPN, LDAP authentication and Snort intrusion detection which can be further studied and applied are mentioned in the conclusion.