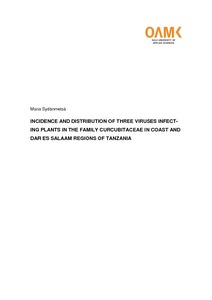 The objective of this thesis is to study viruses infecting plants in the family curcubitaceae in Coast and Dar es Salaam regions in Tanzania. The focus is on watermelon, cucumber and pumpkin farms and to study the incidence and distribution of three different viruses called Cucumber mosaic virus (CMV), Zucchini yellow mosaic virus (ZYMV) and Watermelon mosaic virus (WMV).

Samples were collected from farms on Coast and Dar es Salaam Regions, Tanzania. On the farms the farmers were asked questions about their experience about the viruses and diseases on the farms. The samples were tested to laboratory using ELISA-method and the results were read visually and by using ELISA plate reader.