A Radio Device for Educational Purposes 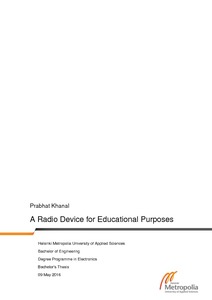 Before the start of this project, it was decided not to manufacture all the components which would be needed in this project by author himself because manufacturing all the components would take more time than the time allocated for final year project and need vast knowledge and research. Therefore Metropolia’s inventory was searched for the components needed for this project, and depending on those components and their working frequency range, a transmitting frequency was selected. Components which were not found, like filters and antennas, were manufactured. After all components were available, they were tested. Their various performance parameters were studied and it was examined if these components would be suitable for this project or not. After studying all parameters, components were connected together and signal of 50 MHz was sent and received through 20 cm space wirelessly. The project have achieved its goal and was successful.