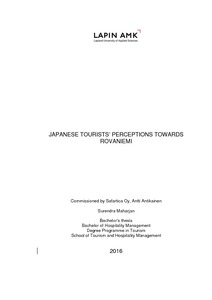 In this modern era of tourism, tourism actors need to be well informed and well prepared for ever changing and demanding nature of tourist. The tourists’ nowadays decides and acts quickly. Moreover the development of technology has facilitated them to do so independently. The aim of this thesis is to explore different factors in developing the image of Rovaniemi into their minds and gain their perception who visited Rovaniemi. This thesis was commissioned by Safartica Oy which is nature based activity and service provider. Japanese tourists travel to Rovaniemi in higher number, both in summer and winter seasons. However, the perceptions they hold about Rovaniemi, their views towards the services they get and the level to which their expectation is fulfilled remains unknown. In order to gain information about their notion about every aspect of Rovaniemi and to determine the further roles of touristic actors, this research has been conducted.
This research is quantitative in nature. The author decided to use quantitative research method as the topic deals with the perception of the respondents; it was thought that the chosen method would be more effective. The research tool used is structured questionnaire. In order to reach to conclusion, data were collected from 51 Japanese tourists. The sampling method chosen was convenience sampling under non-probability sampling.
In order to gain the perceptions of the respondents, the questionnaire included questions under the topic such as the purpose of their visit, best time to travel to Rovaniemi, accommodation, transportation, shopping and entertainment facilities. The responses received were transferred to Webropol and then analysed. The replies from the respondents have been clearly presented along with charts in Data Analysis section. While analysing the responses, the researcher has also given suggestions to the tourism actors in Rovaniemi and steps necessary to be taken in order to create improved tourism destination for Japanese tourists. The research has concluded that the perception the Japanese tourists hold towards Rovaniemi is positive.
Key