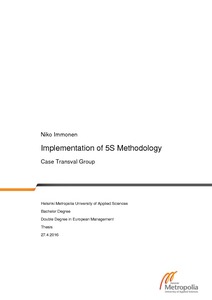 In this thesis, the researcher will explained the fundamental meaning of 5S by taking the reader through the implementation process in practice. The concept “5S”, is part of Lean management. Its main function is to eliminate non-value adding processes, by standardizing working methods and creating a well-organized working environment. 5S is formed from five Japanese words that are translated into English as Sort, Set, Shine, Standardize and Sustain.

The idea for the thesis topic was presented to the researcher in January 2016 by Transval Group. Today, as Lean and 5S has a strong influence in the entire world of logistics, the choice of the thesis topic was reasonable and interesting. The thesis was an action based research, in which the researcher was placing theory into practice. 5S seminars and meetings, related to the project, build a base for the researcher to understand the importance of a well-organized and safe working environment. As the knowledge of the researcher grew during the process, he was able to guide the participants during the implementation.

The implementation was carried out in Transval Groups’s Customer’s warehouse. The entire project itself, was divided into nine different sub-groups. The thesis mostly focuses on the first two sub-projects.

The overall success of the first two sub-projects were measured with a survey, held before and after the implementation of 5S. The researcher asked eight employees from different positions to answer the survey once before the implementation and once after. All eight respondents answered the survey. The analysis of the survey proofs that the 5S implementation project was a success. The change between the first and second survey increased from a total average of 3.46 to 4.54.

The researcher has also included before and after figures for the reader to get a better understanding of the changes made during the implementation process.