Implementation and Testing of QoS Policing 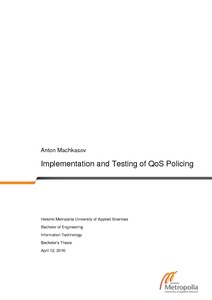 This project aimed at creating a software solution capable of translating messages from an IP Operating System to a hardware configuration and creating a testing environment and a set of tests for a router in order to highlight the results of a Quality of Service (QoS), Policing feature work. This thesis covers the implementation and integration of the translation system and a design, the implementation and integration of tests for the QoS Policing feature and processing of the test cases’ results.

The feature described in this thesis was developed as a part of a software layer between the IP Operating System and the hardware and was integrated into the solution installed on the new Router 6000 series. The specification of the QoS Policing feature provided a compelling reason for its implementation and integration. One of the most commonly used technologies as a traffic rate control was implemented together with a set of functional tests.

A separate set of functional tests for calculating the error ratio of the policer with various burst sizes configured was implemented along with the set of tests for corner cases of the QoS Policing configuration. All gathered data were processed in order to explore the regression between the main parameters of a policer and traffic such as burst size, rate, running traffic rate and packet size.