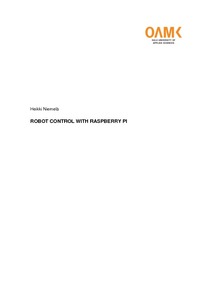 The objective of this bachelor’s thesis was to test if it would be possible to cre-ate a robot control system that controls each robot individually. The hardware used in testing was Raspberry Pi, another aim for this thesis was to find indus-trial hardware which could replace Raspberry Pi in the actual application. The used PLC program was CoDeSys
since a cheap license for Raspberry Pi was recently released. This kind of solution could make developing robots easier and would greatly assist when many robots would be combined.

The test platform was built using Ginolis master and motor cards. These cards were connected to Raspberry. With two motor cards a test conveyer and a sin-gle EC flat motor was controlled. When this physical built was tested also virtual axes were added to the software. In this way it was found out the maximum number of motors that Raspberry Pi could control. Also, a hardware research for replacing Raspberry Pi was done. This research was completed by search-ing products from the Internet and by negotiating with SKS Group.

The research pointed out that Raspberry Pi works as a robot controlling PC. It was able to control 20 motors at the same time with a reasonable jitter. As for the research for hardware, there was available industrial hardware with similar capabilities to Raspberry Pi. Unfortunately, the price of all available solutions were over the budget of this thesis.