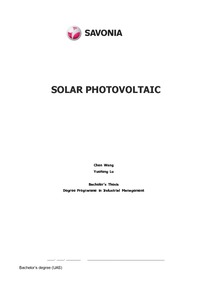 In the 21st century, human demand for new energy sources is urgent, because the traditional fossil energy is unable to meet human needs, and the fossil resource will make pollution, in this situation, solar energy gradually into the vision of scientists. As science advances, humans can already extensive use of solar energy to generate electricity.

Solar energy is an inexhaustible and clean energy. In the global energy crisis, environmental pollution is the growing problem of today. The use of solar energy research is to alleviate the energy crisis, protect the environment and ensure sustainable economic development of great significance. Solar industry is divided into solar thermal industry and solar photovoltaic industry; solar thermal industry's main products are solar water heaters. Scientists have made great process in study of solar power. Humans can do solar photovoltaic in the desert. Solar radiation on Earth is very large. About 40 minutes of solar radiation on Earth, it can suffice the consumption of the energy for all human for one year.

Nowadays, human built many solar photovoltaic plants to generate electricity, and many people are setting solar cells on the roof to generate electricity for their daily consumption. All these prove that solar energy has become increasingly popular. The Governments of China, The USA and some other countries also support the use of solar power, thus reducing the consumption of non-renewable resources and protect the environment.