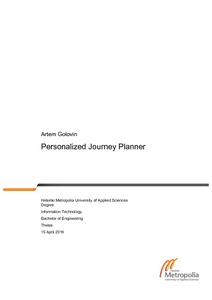 The goal of the GoAbout project was to build a personalized journey planner based on OpenTripPlanner, OpenStreetMap and a custom back end. The project aimed to implement personalization options to provide the best possible experience.

The planner is mainly intended to be used in the Netherlands, however, it is based on open source solutions such as: OpenTripPlanner as a planning and routing solution, OpenStreetMaps as a map provider and ns.nl as a transit feed provider. It utilizes all three sources into one piece and puts a layer of personalization on top. The project can be adjusted for nearly any country which uses well-defined standards such as General Transit Feed Specification.

The planner support user profiles and records user activity which is later used to suggest more relevant results. Also the project allows users to set their own or preferred types of transport and to filter out irrelevant options. The planner remembers previously made choices and adjusts new routes based on these choices.

The main focus was on the personalization options within web application. It also consists of back end and a few other different front ends such as mobile applications and publicly placed touchscreens.

The result is a ready to use ecosystem of products which allows users to plan routes in advance, check previously planned routes at any time in the future and to base new routes on the already planned ones.