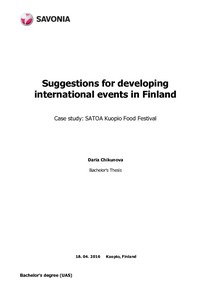 SATOA is an International Food Festival (later named as “project”), organised during the last weekend of summer in Kuopio, Finland, where restaurants offer to taste unique authentic cuisine of North Savo. The main idea is to celebrate the traditional harvest season altogether with citizens and international guests. SATOA was organized for the first time in 2014 and was a great success.

The purpose of the thesis was to provide suggestions for developing the event. In addition, one of the crucial objectives was to develop international marketing. Based on the experience of the previous years, tools, such as analysis of qualitative and quantitative data, and SWOT Analysis were used.

It was concluded that the project was found valuable and interesting by the audience attending the event and businesses taking part in it despite its weaknesses and threats. The core task is to recognize how to minimize them, and at the same time to enhance strengths and increase opportunities. In addition the thesis showed that several tools of international marketing ought to be replaced.

The final chapter of this thesis presents suggestions for improving the project, in particular the ways of developing public relations and advertisement channels.