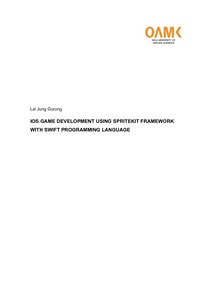 iOS is a mobile operating system for Apple manufactured phones and tablets. Mobile Gaming Industries are growing very fast, and compatibility with iOS is becoming very popular among game developers. The aim of this Bachelor’s thesis was to find the best available game development tools for iOS platform.

The 2D game named Lapland was developed using Apple’s own native framework, SpriteKit. The game was written with the SpriteKit programming language. The combination of SpriteKit and Swift help developers to make game development easy and fast, focusing more time on gameplay than other tedious tasks.

The result was the game running successfully on iOS devices. SpriteKit provides all the necessary tools for creating a 2D-game for the iOS platform.