The improvements of NAO robots in Education 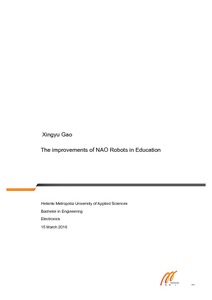 This thesis presents the improvements of NAO Robots in education system. The idea is inspired by a robot program Alpha Go that can win chees champion with real human beings.
The goal of the thesis is to investigate and develop the applications of NAO robot used in education by now and to find the possible improvements for the future. The initial response of behavior in Human-Robot Interaction between Humanoid Robot NAO and children with Autism Spectrum Disorder(ASD) is simulated in software choregraphe. The experimental shows the possibility that the autism behavior of the children with ASD in the Human-Robot Interaction based on the robot NAO is greatly reduced than the normal class session. Hence, it can be concluded that the humanoid robot NAO has potential to serve as a plat- form to support and initiate interaction for both students and teachers in education.