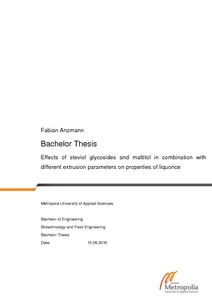 Liquorice confectionary are well known all over the world. Liquorice are typically produced in steam heated pots or by an extrusion process. The main ingredients for liquorice are sugar (typically sucrose, invert sugar or glucose syrup), wheat flour, molasses and the liquorice extract, which is giving those confectioneries their special taste. Besides providing the sweetness, sugar also affects other properties like glossiness or moisture stabilization. Due to the adverse health effects of sucrose, there are reasons to replace sucrose with sweeteners such as aspartame, steviol glycosides or maltitol. The aim of this research was to determine whether the different sweetener (maltitol syrup and steviol glycosides) in combination with changing extrusion parameters (mass flow) have an influence on the final product.

In the present study, two different recipes, one with liquid sugar 77 and one with steviol glycosides and maltitol syrup, were used. The calculated amounts of steviol glycosides and maltitol syrup offer the same theoretical sweetness than the liquid sugar 77. The liquorices were produced with two different water contents and one centre point (21%, 23.5%, 26%). During the production the mass flow was changed (70g/min, 100g/min, 130g/min). The variables which had been constant were the temperatures in the different sections and the screw speed (55rpm). Afterwards the water content, the water activity and the diameter of the liquorices were measured. An extension test was done to determine the maximum load with the corresponding extension. Additionally, a consumer test had been done with 40 test persons, who had to evaluate the texture, the sweetness and the overall liking of four liquorice samples, which had been chosen beforehand.

The research showed that by using maltitol syrup and steviol glycosides a higher water content has to be used to get similar diameters and textures in comparison to the liquorice produced with liquid sugar. More water was necessary because maltitol syrup has better water binding properties than sucrose. Therefore, less water was available for the starch to gelatinize. However, a particular influence of steviol glycosides on physical properties could not be detected because it was only used in very small amounts.