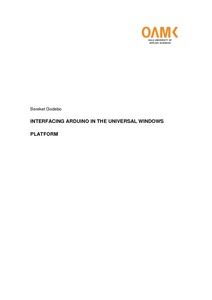 The objective of this Bachelor’s thesis was to connect Raspberry Pi 2 running Windows 10 IoT Core via a USB to Arduino. Moreover, the aim was to delegate Arduino the work of controlling sensors, and to send data to Raspberry PI 2 whenever needed. This project was part of a Home Automation project created by my Instructor Pekka Alaluukas as a hobby and the devices used in this pro-ject were provided by the School of Engineering.
In the process of implementation, the project work was divided into tasks such as, developing a serial module on Raspberry Pi 2, developing its counterpart on Arduino and developing a protocol to be used for synchronizing the communica-tion. And then it was proceeded incrementally by adding a functionality as re-quired on the working modules.
Future improvements can be made in areas such as creating a Windows runtime component that connects to Arduino, supporting a cancelation of asyn-chronous operations and throwing an exception for an error that occurs in the chain of task instead of showing it on the screen.