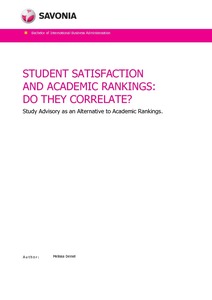 The thesis was carried out in order to better understand the customer satisfaction of students, as well as to how their satisfaction can be measured and used for the marketing of universities that are not currently highly ranked on traditional rankings, or even ranked by them at all.

The research part of this thesis was carried out on a global scale using a survey about student satisfaction in April of 2016. The survey received 2049 responses from students of 77 nationalities, shedding light onto the level of satisfaction they have with the 231 universities that they represent. The company Study Advisory has already used the results of the research for their product development, marketing efforts and press releases in order to boost their global brand. The findings of this thesis will also be used in the future as a supportive tool for sales, marketing and branding efforts.

The conclusion of the thesis is that traditional academic rankings rarely express the satisfaction of a student from a students point of view, thus, there is a clear market for the Study Advisory Popularity Rating product, which ranks universities mostly on the satisfaction ratings of their current students and alumni.