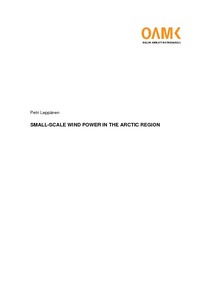 Thesis was done for Iin Micropolis Oy, as a part of an Arctic Energy project. The project is founded by European development fund Interreg Nord, Regional Council of Lapland, BusinessOulu, Länsstyrelsen Norbotten and Interreg-program in Norway. The project aims to develop and test a simulation method for energy production in Arctic areas.
The aim of the study is to research if small-scale wind power could be applied for Arctic areas. The work is done in three parts, which included technology, manufacturers and economics. Technology study focuses on finding out what choices are available and what are their benefits and weaknesses. Manufacturer chapter concentrates in searching local and other well established products from the market. Economic study is done to understand whether small wind turbines could be profitable in the arctic region.
The thesis was done mainly by researching literature and internet based sources, to get a full understanding of the current state of small wind turbines. Economic calculations were done with Excel. The calculations were done with wind turbine certification based information and Finnish regulations.
Small-scale wind power is gradually becoming a viable option as an energy production method. There are manufacturers in Finland and Sweden, but they are small in comparison to Danish, British, American or Chinese manufacturers. Cost of SWTs has been slowly degreasing and it has made small wind turbines an interesting option for a renewable energy source. According to the calculations small-scale wind power can be profitable in the arctic region, but not everywhere. Annual wind conditions have to be around 5 to 6 m/s, for a profitable installation.