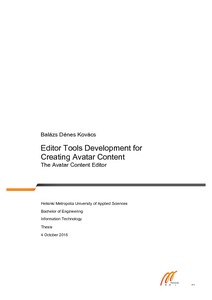 The goal of thesis was to create a more efficient replacement for a tool used for creating avatar content for a new game. This new tool had to manage clothing, color and other in-game products in direct communication with the servers of the game to aid artists and balancers with their jobs. Additionally, the user interface of the tool had to be more advanced and easier to use than its predecessor in order to make a successful replacement.

The implementation of the new content editor tool mainly involves Unity editor scripts written in C#. The tool was a custom inspector of a singleton object that manages products locally and over the network. The new content editor uses many classes and libraries of Unity as well as custom helper libraries. The most vital Unity classes for the project were the Editor and EditorGUI classes.

Finally, the development project of the Avatar Content Creator resulted in a finished product. The resulting tool is a proprietary software designed to work exclusively with the contents of the new game. This product enables artists and balancers of the game project to create and manage in-game products faster and with less effort compared to using the old tool. The project faced many changes which ultimately made the tool better. Furthermore, the project was delivered on time in accordance with the initial plans.

Now the tool is in use by the development team. The UI of the new tool makes it easier to browse and manage products as well as the creation of game content. Furthermore, the resulting tool reduces the development time and the difficulty of releasing game content. The new tool is ready for improvements, such as a view for a comprehensive overview of some statistical values acquired from certain attributes of selected products.