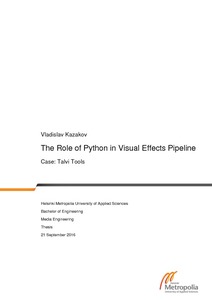 The purpose of this thesis was to study the concept of visual effects pipelines and analyze how programming language Python can fit into the post-production phase of film making. In the extremely competitive environment of visual effects industry, companies are forced to constantly look out for newer technologies and research more optimal production methodologies. In search of feasible solutions studios often come across Python.

The theoretical part of the study outlines a brief history of Python and illustrates the power of this programming language with two exemplified use case applications. In addition to that, various possible Python implementations in the production of computer generated imagery are extensively reviewed. To give a more complete picture of how this programming language aids post-production, the adoption of Python by Industrial Light & Magic is examined. As it became clear that Python would prevail in the production of computer graphics, software vendors started embedding Python support in their products. This claim is further supported by the analysis of Python integration within major contect-creation applications.

The outcome of this study is the add-on for Blender developed in Python. The purpose of the add-on is to facilitate and accelerate the export of character and camera animation data, which is specifically useful for projects that require a substantial amount of computer animation to be moved from Blender to another software for later use.