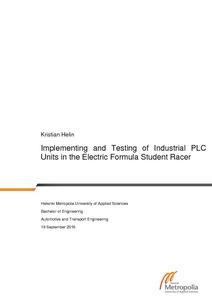 This Bachelor’s thesis was done with the intention to increase the understanding of the electric and dynamic systems in the electric Formula Student racer HPF015 built by Metropolia Motorsport in 2015. Due to a significant number of electrical parts being transferred to the new competing car, a new control system design had to take place to keep the car as a testing platform for the team.

Due to issues with the electrical system in HPF015, enough data for the design of the new car was not achieved. The same issue had taken place for approximately three full seasons. The lack of data has been considered as one of the key issues resulting in repeated failures and difficulty of troubleshooting the electrical system. For this reason, a rugged testing platform was necessary to be made with the intention to understand all the aspects of the behaviour in both electric and dynamic systems of the car, before the design of HPF017 was to be started.

The system design is based on ABB AC500 – XC series units. AC500 - XC is a PLC platform designed for harsh industrial environments. With combining the robustness of an automotive system, the high processor power and an extraordinary data logging capability the system fulfils the requirements easily. Also testing this type of system in an electric car was considered interesting by ABB Oy, therefore the necessary components were sponsored by the company for this project.

The main targets of the design were to implement the industrial PLC system into a Formula Student car, gather a significant amount of data during the short track time and giving a possibility of further testing possibilities if the team decides to continue with a similar type of car. Due to the structure of the system, expanding the data logging is possible by adding components to the ProfiNet network. As the load of data read in is only about 14 % in analogue data and even less in data buses, the possibilities can be considered almost limitless for this type of application. The expansion possibility is neither restricted to manufacturer due to the use of an industrially standardized data bus.