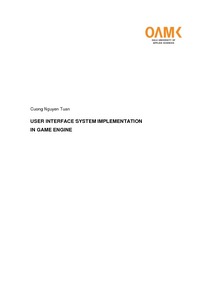 The thesis work was based on user interface implementation theory for RPG Maker MV, a Japanese game engine. The outcome of this work was creating a user interface system which was easy to configure and install whilst powerful enough for advanced users and developers.

The project has successfully implemented the user interface framework, allows users creating their own design in-game. There was still room for further devel-opment, such as allowing users implementing new features with the provided UI tool, or allowing third-party developers integrating features into the system and tool with simple APIs.