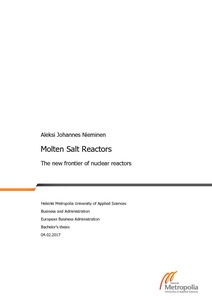 The aim of this paper is to present an alternative view on the prospect of nuclear power. Through analyzing the history, current developments and the limitations of current nuclear technologies, it is possible to gain a broader understanding of the subject and raise awareness regarding our energy needs in the future. Moreover, due to predicted increases in energy demand, future generations will be at the mercy of technological advancements more than ever before.

Fossil fuels play a large role in providing the world with a cheap and abundant source of energy. However, their consumption comes at a price; the climate is changing due to our activities, thus a change in course is needed. While nuclear energy has been around for a long time, its development has been slow due to an abundance of cheap fossil fuels and it has seen much adversity due to its perceived dangers. Indeed, this is one factor that affects the adaptation of nuclear energy, including potential future investment.

Regardless of opposition, nuclear energy is one of the safest and most stable forms of energy production. The accidents that have occurred, have burned an incomplete and distorted image regarding the dangers of nuclear power. However, statistically speaking, nuclear power has the lowest death-rate per terawatt-hour (TWh) due to releasing almost zero greenhouse gasses whereas, burning fossil-fuels indirectly causes the deaths of hundreds of thousands of people every year. Currently, nuclear power provides the world around 11% of its power requirements, whereas, the majority still is provided by burning of fossil-fuels.

New technologies such as the development of Molten Salt Reactors (MSR) are being re-searched in order to improve the safety, reliability and sustainability of nuclear reactors. Indeed, the foregoing of water as a coolant is one of the greatest steps being taken in nuclear safety. Moreover, MSR's are expected to be much more economical to build com-pared to current designs due to their smaller physical footprint and simplified safety features which add to their value compared to other sources.

In the future, these technological advancements are invariably going to play an essential role in helping to solve the global climate crisis. The global population is expected to rise to 8.7 billion by 2035 which is going to put a strain on resources and the need for access to clean water and electricity. Indeed, world electricity demand is expected to rise from the year 2011 to 2035 by 81% and this demand must be met via carbon-neutral methods if the goals for sustainability are to be met.

This thesis takes an in-depth look at current and future nuclear technologies, their cost competitiveness compared to other sources and their impact on sustainable development for a greener future.