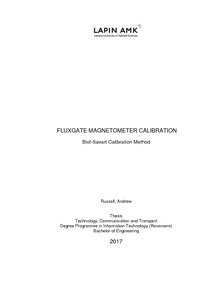 The aim of the study was to investigate if the law of Biot-Savart could be applied to a method to calibrate a fluxgate magnetometer at Arctic latitudes. The fluxgate sensor to be calibrated was commercially produced and included integrated signal acquisition and output interface circuitry. A mu-metal alloy magnetic field shielding chamber was not available for this study. Standard laboratory test equipment and apparatus were utilized to produce a calibration method with a very modest budget.

Results for the method were achieved only in the z-axis since this is the strongest component of geomagnetic field at arctic latitudes. Results in the x-axis and y-axis were not achieved, being weaker and varied considerably with slight changes in orientation. The absence of a precision mechanism to hold the fluxgate sensor in geographic North-South and East-West alignment made measurements impracticable. The results achieved in the vertical z-axis were consistent and allowed the output of the fluxgate sensor to be plotted against magnetic flux density.