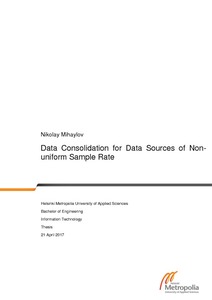 The goal of the thesis was to create a web application which would allow users to configure different sources of time series data with a non-uniform sample rate, and to unify that data into a single output with a constant sample rate. The final result would then be visualized into a chart.

In today's world it is important to provide data in digital form about all aspects of life. It is expected that there is information about everything and at any time. This is often achieved with the help of different sensors that measure certain values. The reality of how time series data is gathered and stored is that it is often impossible to have data taken at fixed time intervals, or in other words the data's sample rate is non-uniform. This raises some problems with visualizing the data, when the users expect it to be taken at regular intervals. People often need the data to be taken at regular intervals, as it makes it easier to understand it, and it could be used more easily for statistics and for noticing certain trends.

This project is a continuation of an Innovation Project, which aimed to create a Web user interface for visualizing time series data into charts. As such, several decisions regarding the used technologies were already made in advance. The project mostly used the Symfony 2.8 PHP framework with some additional technologies that are often used with it: twig PHP template engine for building the HTML5 output of the pages, Doctrine object relational mapper (ORM) for interacting with the relational database management systems (RDBMS). In addition, the project used the jQuery JavaScript library for handling some of the user interface and user interaction. The charts visualizing the time series data, which were built primarily during the Innovation Project phase, used the Data-Driven Documents (D3.js) JavaScript library.

The web application designed for this thesis shows several different techniques for solving the problem of consolidating the non-uniform data into one with a constant sample rate. The web application is aimed to work for different types of time series data, and as such there are several different possible desired results that have been considered. The thesis describes when a certain technique is more suitable, depending on the expected result and on its practical application in the world.