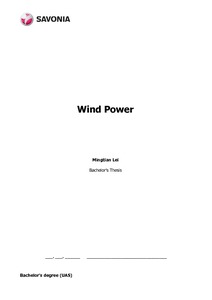 With the growing shortage of traditional energy, the development of renewable energy becomes more and more important. Wind power, as an energy which has been used for thousands years, has its new life in the modern society. Wind turbines can convert wind power into electricity which can be used by people through the power grid. According to learning principle of wind turbines, a basic understanding of this conversion can be settled. The example of Denmark will be introduced so that readers can understand how the government can play an important role in developing infrastructure and the whole industry. The current recycling situation will be analysed and problems which should be solved in the future will be pointed.