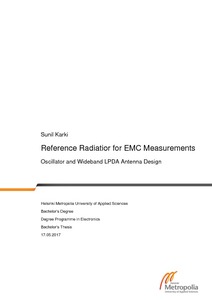 The aim of this thesis was to produce a reference radiator for Electromagnetic Compatibility (EMC) measurements, where a Voltage Controlled Oscillator (VCO) is used to generate wide-band signals of 600-1300 MHz, that will be radiated by wide-band antenna. After amplifying the signal, another similar antenna was used to receive the signal and the whole radiation pattern was examined in an anechoic chamber located at Electronics department of Helsinki Metropolia UAS. This radiator will be used in one of the EMC labs by the students who are going to study professional EMC course.

The VCO and RF amplifier used in this project were bought from Mini-Circuits, whereas the antennas were designed from the scratch. However, to demonstrate the knowledge on how oscillator is designed, a negative resistance microwave oscillator was designed using AWR Microwave Office software tool. The project did not involve the fabrication of the oscillator as this would take more time than allocated. The type of antenna designed was printed or microstrip log-periodic dipole array, which was first designed and simulated using CST design studio and later fabricated on FR4 PCB board.

The conduction of antenna tests in an anechoic chamber using network analyser demonstrated that the antennas were performing well for the desired frequency band when taking reflection and transmission coefficient into account. The simulated and measured results were supporting each other very well with respect to radiation pattern and directivity. Furthermore, the frequency spectra were obtained as mentioned in the datasheet of VCO from mini-circuits when the whole setup including the VCO, RF amplifier and the antennas was tested using spectrum analyser. Therefore, this allows that the setup can be used as a de-vice of reference radiator for various antenna tests related to RF.