The Benefit of Targeting Trending Niche Marketing Segments and Re-positioning of a Company : Choosing the winning marketing strategies for Reebok 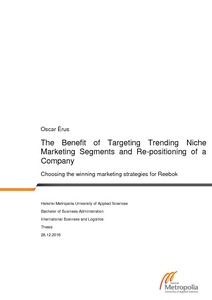 This thesis will discuss different phases of Reebok’s development and study the underlying causes. The thesis will seek to understand which factors of strategic marketing made the company a market leader in the late 1980s and which factors caused the company to be unsuccessful in keeping the position. The company got lost in the process and failed to bounce back even though Reebok had the knowhow and financial capability to take seri-ous actions. This seemed to eventually lead to a bankrupt unless the company was able to find a new way to shine.

Reebok was acquired by Adidas-Salomon in 2005. Adidas Group wanted to establish a stronger presence in the north American markets, and hoped Reebok would play a vital role in their strategy. In the late 2000s company went through re-positioning and were forced to go through an effective segmentation, targeting and positioning process. In a way, the com-pany was now returning back to its fitness roots with a modern update. The company aimed to differentiate itself from the other sporting goods giants by not focusing their re-sources to major team sports that usually are the cash cows for companies. By targeting trending niche segments that held major potential gave Reebok the long waited chance to bounce back and become interesting again.

The thesis will discuss the relevant literature about strategic marketing by major authors. Study the key findings and important commonalities as well as differences. The relevant factors will be taken to considerations to develop future recommendations for the company and further studies. Eventually limitations of the research will be monitored and the re-search questions will be answered.