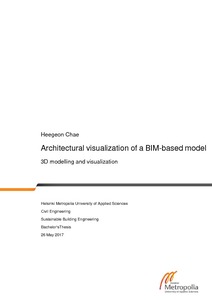 This thesis aimed at introducing the benefits of Building Information Modelling (BIM) technology and at comparing it to Computer Aided Design (CAD). A major aim was to show the importance of architectural visualization and to illustrate how to create architectural visualizations using a three-dimensional (3D) model from a BIM programme. For the thesis, a draft model of a single-family house was created with ArchiCAD, a BIM programme.