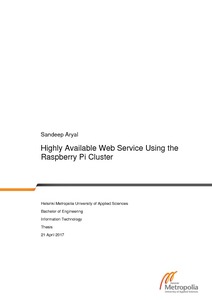 This project aimed to give theoretical knowledge of high availability and implementation of a highly available web service using open-source tools and the cluster of Raspberry Pi. In the project, high availability was demonstrated by implementing a web server and balancing the load in the Raspberry Pi cluster. The project was planned to be done in two parts.

Initially, the first part of the thesis was to do an initial setup which included initializing the Raspberry Pi, installing and configuring web server on two nodes and setting up one load balancer. Secondly, the project was driven toward the high availability achievement with the additional installation of a load balancer with a health check-up and failover. Additionally, a mirroring between the two web server nodes was done to sync the files and directories. Open-source tools like Raspbain, the Raspberry Pi operating system, HAProxy, Keepalived, Apache web server and Rsync were used to achieve the goal.

The design and implementation of the project demonstrated the high availability principle. The project was designed to create the prototype of cluster-based computing to gain high availability web service. As a result, highly available web service was successfully implemented using Raspberry Pi cluster and open-source software.