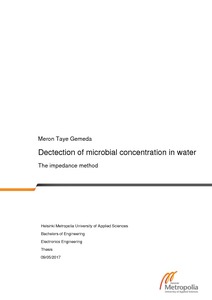 The proposed detection system for the thesis is based on the impedance microbiology method, a rapid microbiological technique used to measure the microbial concentration of a sample by monitoring the electrical parameters of the growth medium. The prototype operates based on the integrated circuit AD9533 which is interfaced with a microcontroller (32 bit Arduino Due) and a pair of electrodes for detecting changes in the sample under test. Various tests were conducted to obtain a proof of concept. Since acquiring the strain of bacteria that are lengthily discussed in the thesis is challenging for many reason, the proposed measurement system instead attempts to measure the changes in impedance for a group of nitrogen fixing bacteria called Rhizobium, which was acquired from the Helsinki University microbiology laboratory. The results from the measurements were inconclusive about the level of concentration of the bacteria in the contaminated solution due to lack of the appropriate controlled environment but nevertheless provided results that could be attributed to the growth characteristic of the contaminating bacteria though there were also other possible explanations. Moreover, the developed measurement system is capable of assessing the gradual change in impedance that might occur in a solution for a specific range of impedance, frequency and excitation voltage.