Analysis of microplastics and their removal from water 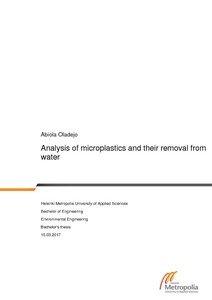 Two experiments were done: in Experiment 1, the microplastic solution was not mixed in the oil solution, and in Experiment 2, the solution was mixed vigorously in oil. The resulting solution then underwent separating funnel method for separation into two phases. The water phase was filtered in order to know the amount of microplastics in the water medium. The analysis of the amount of microplastics in the water medium was done by weighing the mass of the filter paper containing the microplastics substrate after drying. Replicate experiments and measurements were done.

Results show that microplastics could be successfully extracted from water by the filtration method. However, when the polystyrene microplastics in water were mixed vigorously in the oil (Experiment 2), more polystyrene were cleaned from the water by the oil. This observation was supported by the results of the quantitative analysis, which indicate that an organic medium can be used to clean high density microplastics to some degree.