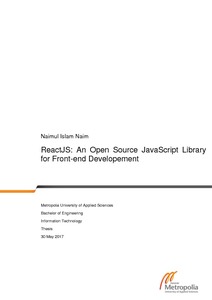 Being developed by Facebook for their internal use, it has proved as an efficient and fast library compared to other technologies. However, it has been open-sourced later on and enriched with more functionalities everyday by plenty of contributors. When it comes to dealing with large amounts of data and users, it has been quite successful to give better user experiences. Alongside Facebook, some other big organisations and applications are also using ReactJS and React Native for their development. Instagram, Netflix, Airbnb are a few of the big names serving smoothly enormous numbers of users worldwide. Those big names prove that ReactJS is serving them quite well.

Throughout the research, the main intention was to evaluate the library and to prove ReactJS as a compatible platform to be adopted where there are several options to choose from. The fundamentals, core architecture, features, data handling methods, popularity, and adoptability were discussed in this study. Even though, there is no constraint to use ReactJS over other frameworks it is recommended to use it as an emerging web technology to be adopted depending on the nature of the intended application to be built.