What is the Impact of the Cosmetic Industry in the West on Caucasian Female Consumer Wellbeing? 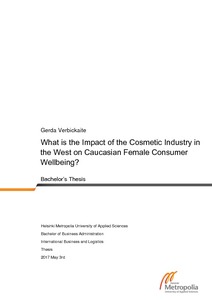 This study explores the impact that cosmetics have on female well-being regarding psychological, physical, social, career and education aspects. In the western world, cosmetic products are not only accepted, but are also often encouraged to be used for Caucasian females to look most attractive, thus be perceived more positively by society. “What is beautiful is good” (Dion, Berscheid, Walster, 1972), but it can also be harmful. Through various media channels, the perceptions of beauty are shaped and stereotyped. Through such channels females learn about appearance norms. As they learn from them, females feel pressured to use cosmetics in order to manipulate and enhance their face features to match the expectations.
Through this study it was found that females are heavily dependent on the usage of cosmetics in order to feel confident and comfortable in social situations. Female participants of the questionnaire were less pleased about their natural appearance compared to when using cosmetics, majority of them use cosmetics always then they are in public. With the use of cosmetics females can appear more social, secure, confident or popular. Females wearing cosmetics are perceived as more feminine, thus in applying for jobs regarded as masculine makeup can be disadvantageous. Cosmetics can also affect perception of female’s social class and health. Overall, usage of cosmetics can decrease female confidence, as well as distort perception of natural beauty and stereotype the characteristics to certain appearances, however it is not clear how much of that damage is caused directly by cosmetic industry.