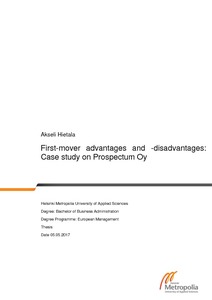 The aim of this thesis was to find out what kind of a first-mover advantages and disadvantages has Prospectum Oy experienced with its event message feed product during the past seven years and whether it has become the market leader in its segment because of entering first or nevertheless the market entry order.

The work is based on first-mover advantage and -disadvantage theories that have been discussed by many scholars during the past thirty years. A large amount of these key theories were introduced before the rise of e-commerce in the late 1990s and therefore the paper tries as a secondary objective to discuss whether the traditional theories on the topic apply to the current marketplace. As the case study company is a small software company in a Finnish market, the paper offers an interesting point of view on the topic.

The case study was conducted by having in-depth interviews with the company founder. The interview questions were built around the existing theories on the topic.

The results indicate that many existing theories on the topic can be applied also to a software market in the 2010’s and that Prospectum Oy has experienced more pioneering advantages than -disadvantages so far but this can change in the future. The results seem to indicate that the combination of right resources and early experienced first-mover advantages have been the forces behind the company’s success with the event message feed product.