Further Development of Settings Feature on the SPENT iOS Application 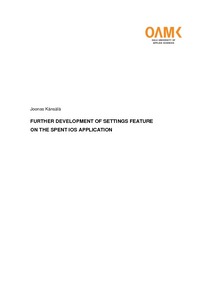 This thesis was commissioned by the firm Receiptless Software Oy and the aim of this thesis was to create a new settings feature for an application called the SPENT on iOS mobile platform. The purpose of this new settings feature was to improve on the old feature that the previous version had and to add new functionalities, for example, security settings and a new user interface.

The new feature was created by using an Xcode development environment, which then had necessary components for developing the new settings feature. The components the project used were two major frameworks within the Cocoa Touch Framework: UIKit and Foundation. After the new settings feature had been created, it was tested thoroughly by testers within the firm and by an outside testing firm.

The project was a success and it was released into the App Store as a version update. Although the decisions for creating this new application were appropriate, storing user details should be done in a way that the user details will be encrypted.