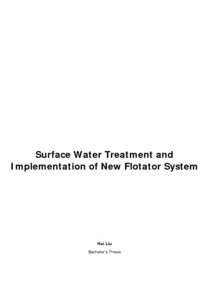 Nowadays surface water can be utilized in many ways, such as treated for drinking or other human consumption. But the humus present in surface water causes problems in water quality, both in household water production and distribution to consumers. The purpose of the surface water pilot plant is to clean surface water and produce household water for human consumption.
The final purposes of the thesis were to make it clear that how the system of the surface water treatment plant works and to find out what needs to be taken into account when introducing a new flotator system.
The thesis consists of four parts in general, introduction to the surface water treatment processes, the project on lab-scale tests, tests of the Savonia’s surface water pilot plant and tests of the new flotator system. The purpose of the project was to find out the optimal variable parameters of chemical surface water treatment in lab-scale tests. The main equipment was Flocculator 2000, which has been designed for flocculation tests under laboratory conditions, and aims to simulate the stages of the process more effectively. Coagulation forms in beakers sized 800 ml by Flocculator 2000. After sedimentation, samples from the upper liquid were taken for analyses including pH, color, iron, turbidity and chemical oxygen demand (COD). In this case, the main variables were the pH level and the dosage of PIX, with other conditions under the same circumstances. Optimization was known when tests were done by changing the parameters and analyses were done by laboratory methods. The results showed that when the pH level was 4.5 and the concentration of PIX was 95 ml/m3, it reached the optimum. The tests of the savonia’s surface water pilot plant and new flotator system were based on the lab-scale tests. In the surface water pilot plant, different values of pH level and concentration of PIX were tested to determine if the values 4.5 and 95 were respectively the optimum. After some adjustments and analyses, the new flotator still needed further implementation.
The results indicated that when the pH level was 4.5 and concentration of PIX was 95ml/m3, the surface water pilot plant treatment reached the optimum. When taken to field work, some improvements can be applied to the new flotator system. They are: 1) Expand the volume of new flocculation tank. 2) Connect one or two more flocculation tanks. 3) Slow down the rotation frequency of mixer to about 7 Hz in flocculation tank. 4) Turn the two inside walls of flocculation tank off.