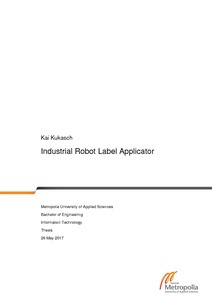 The thesis deals with a project carried out for developing and setting up a robot label applicator system. The requirement was that RFID tracking labels can be applied on flexible positions, without manual effort and rearrangement, via programming.

The purpose of the robot label applicator system is to increase the efficiency in production sites, where the RFID label position can change, depending on product or other reasons. New label positions should be programmed easily with a human-machine interface. During the production, the applying position can be switched instantly with simple software commands. Another great benefit of the proposed solution is that most of the components are commonly used products off-the-shelf. This minimizes production losses in case of broken components as they can be replaced easily with spare parts in stock.

In the project, an industrial robot, including a controller and human-machine interface was used for doing the movements and controlling inputs and outputs. For picking up the RFID labels a customized vacuum tool, mounted on the robot, was used. The robot application, which primarily contains target points, tool positions and moving functions, uses the RAPID programming language. It also handles the transmission control protocol (TCP) communication in a separate thread.

A functional label applicator system was implemented and assembled in this final year project. A long-term field test, under production environment, will follow soon. During and after the field test further enhancements in the system can be done, primarily in the vacuum tool and speed of the robot.