Diversity in companies: towards more equity? 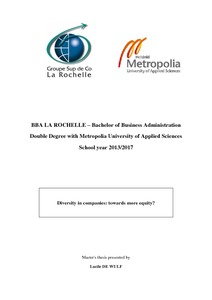 This thesis aims to explain how diversity in companies can lead to more or less equality between candidates. During this study, we will see the theoretical side of it, and then a practical study will be made in order to find an answer to this problematic.

In the theoretical part, concepts of diversity will be detailed and diversity management will be explained. Through a deep analysis of Walter Benn Michaels's book, the controversial idea that diversity can lead to inequalities emerged and is questioned. Then, for the second part, three companies from different countries (Canada, Belgium and France) have accepted to answer a questionnaire on the affirmative action concept. This concept is at the center of this thesis because it highlights the controversial side of increasing diversity through a way of discrimination. Finally, I aim to show the similarities and differences in the practices of affirmative action between countries, by analyzing this survey's answer. We will see in this chapter that the stakes for companies are not always the same, depending on the cultural and historical context of the country itself.

Diversity is now at the center of company's strategies, and it must be fully understood in order to be successfully managed. It can be a real competitive strength if it is implemented for the right reasons. However, some progress and improvement should be made so diversity and equality become the core of the company policy.