The Bitcoin event : How bitcoin and blockchain are challenging the established order and the practices of our economic system 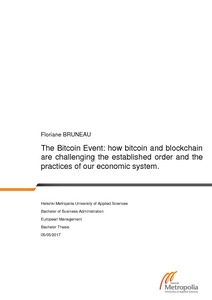 Following a trend of digitalization and happening after the subprime crisis, the Bitcoin event introduced the world to new possibilities regarding payment, data management and more importantly, the concept of decentralization: the possibility of building an organization without a central authority and managed by its users.
Bitcoin presents multiple innovative facets: the concept of cryptocurrency that is not submitted to any regulating authority, allowing free variations in value according to the market rule of supply and demand. The possibility of a new payment system suppressing all intermediaries, with the advantage of being faster, cheaper and more secure. But bitcoin, by being unregulated, consists of a very volatile currency and faces difficulty to inspire trust because of security matters, the bad image of an underground currency used for illegal purposes and finally the lack of recognition and trust that the financial institutions accord to it, making it a hazardous business.
On the other hand, blockchain benefits from a good reputation of fast, cheap and secure transactions, as well as a good potential for concrete businesses applications. But as Bitcoin, it faces trust matters and has the disadvantage of being too complex and costly to become a new norm in real economy transactions.
If both of these technologies have good principles, few are applicable to our system as it is now, but the principles that can be applied can change the face of our economy in the coming years; because of these two technologies, but also all the movement they generated around them in terms of innovation and inspiration for change